Herdla Fuglestasjon (bird station) was established in 2012 which was the first year for organised bird ringing through both the spring and autumn migration periods.

The aim for this activity was to produce new information about a part of the bird life at Herdla, which there was very little previous knowledge.

Historically, Herdla has been recognised for its rich bird life connected to the seashore and the flat Herdlaflaket. This location has for many years been known as the best place for bird watching in Hordaland, and there have been systematically collected observations from Herdla for 40 years. However, there has been very little information on the importance the area has for passerines although Herdla is likely to be an important location for both migration and for breeding.  When Herdla Fort was made available to the public, the ornithologists quickly signalled that they wished to use this area for environmental research to increase knowledge about the importance of the area for passerines, and the suggestion was to start organised bird ringing.

In total, 7644 birds have been ringed in the period 2013 - 2016. The species with the highest number caught is Common Redpoll with 1647 ringed individuals. In total have 71 species been ringed.

We regularly receive reports of re-traps of our birds both from Norway and abroad, which provides us with important knowledge about the migration patterns in the autumn and where they choose to over-winter. The ringing activity is a shared project between the Bergen Chapter of the Norwegian Ornithological Society and Bergen Ringing Group. 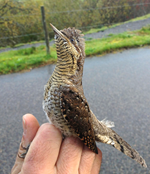 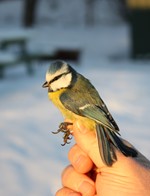